I certainly have no regrets at all, it's the best thing I ever did. I kind of wish I'd done it sooner." 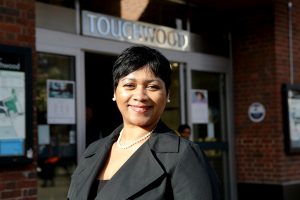 After a diverse career working in HR across many different organisations and sectors, Erica Burke launched her HR Dept business in Solihull in October 2019. This month we found out a bit about her professional past, why she chose to become one of The HR Dept team and (for the curious) how she would survive on a desert island.

How did you get into HR and what kinds of organisations have you worked in?

In the sixth form I took part in a project called The Young Enterprise Scheme. In this, a group of students formed a company to produce and sell products. My role was the personnel manager and that had me sorting out discipline and pay. I’d found my calling!

After university, I joined Marks and Spencer as a graduate trainee before becoming an assistant personnel manager. When I moved on from there, I became head of HR at Enfield College. Four years later I moved again, this time to International House as their first director of HR. I felt on top of the world.

After my children were born I sought out new experiences. I spent the next 15 years working as an HR consultant within higher education, the Civil Service, regulators and private companies. I had lots of great challenges, and enjoyed adapting to different cultures, delivering successful outcomes and making a difference.

What is the most amusing question you’ve ever been asked in relation to HR?

I have been asked what satisfaction I could possibly get out of such a career!

What attracted you most about joining The HR Dept team?

It was a combination of the strong brand, the values, the people and the support to develop and grow my own business.

And to end on a bit of fun, if you were stuck on a desert island and could choose one book, one song and a food item, what would they be?

The Godfather, I never tire of it; (You Make Me Feel Like A) Natural Woman by Aretha Franklin; and potatoes: they are so versatile and filling.